Logical Volume Management (LVM) is a method used by Linux to manage storage volumes across different physical hard disks. This is not to be confused with RAID. However, it can be thought of in a similar concept as RAID 0 or J-Bod. With LVM, it is possible to have (for example) three physical disks of 1TB each, then a logical volume of around 3TB such as /dev/sdb. Or even two logical volumes of 1.5TB, 5 volumes of 500GB, or any combination. One single disk can even be used for snapshots of Logical Volumes.

When learning about volume management with LVM, it is easier if we know what each component in LVM is. Please study the following table to get a firm grasp of each component. If you need to, use Google to study. Understanding each piece of a logical volume is important to manage them.

A physical volume will be seen as /dev/sda, /dev/sdb; a physical disk that is detected by Linux.

If we have two physical disks of 1TB each, we can create a volume group of almost 2TB amongst the two.

From the volume group, we can create three logical volumes each of any-size not exceeding the total volume group size.

Before being acquainted with the latest and greatest featured tools for LVM Management in CentOS 7, we should first explore more traditional tools that have been used for Linux disk management. These tools will come handy and still have use with today's advanced LVM tools such as the System Storage Manager: lsblk, parted, and mkfs.xfs.

Now, assuming we have added another disk or two to our system, we need to enumerate disks detected by Linux. I'd always advise enumerating disks every time before performing operations considered as destructive. lsblk is a great tool for getting disk information. Let's see what disks CentOS detects.

As you can see, we have three disks on this system: sda, sdb, and sdc.

Disk sda contains our working CentOS installation, so we do not want to toy around with sda. Both sdb and sdc were added to the system for this tutorial. Let's make these disks usable to CentOS.

We now have one disk labeled. Simply run the parted command in the same manner on sdc.

Create the Partitions on the Disk

We will only create a single partition on each disk. To create partitions, the parted command is used again.

Is this still acceptable to you?

Information − You may need to update /etc/fstab.

As you can see from lsblk output, we now have two partitions, each on sdb and sdc.

Finally, before mounting and using any volume we need to add a file system. We will be using the XFS file system.

Let's check to make sure each have a usable file system.

Each is now using the XFS file system. Let's mount them, check the mount, and copy a file to each.

We have two usable disks at this point. However, they will only be usable when we mount them manually. To mount each on boot, we must edit the fstab file. Also, permissions must be set for groups needing access to the new disks.

We will go through the process of creating a simple volume pool and logical volumes in CentOS. The first step is installing the System Storage Manager.

Let's look at our disks using the ssm list command. 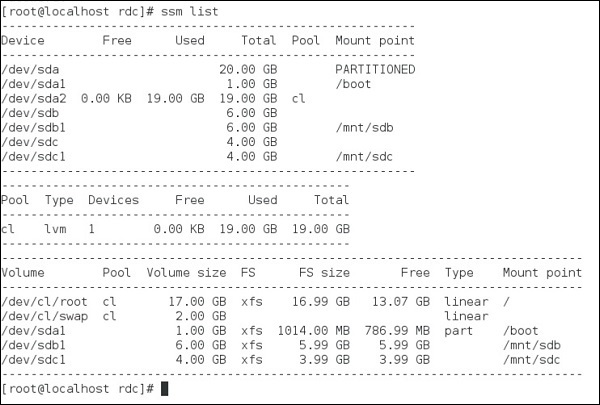 As seen above, a total of three disks are installed on the system.

What we want to do is make a Volume Group using two disks (sdb and sdc). Then make three 3GB Logical Volumes available to the system.

By default, ssm will create a single logical volume extending the entire 10GB of the pool. We don't want this, so let's remove this. 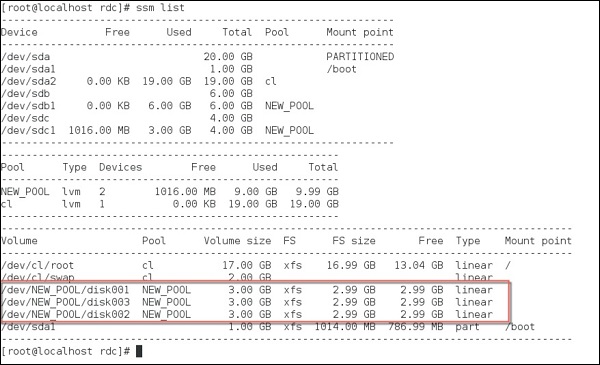 Logical volumes are a powerful feature now built into CentOS Linux. We have touched the surface on managing these. Mastering pools and logical volumes come with practice and extended learning from Tutorials Point. For now, you have learned the basics of LVM management in CentOS and possess the ability to create basic striped Logical Volumes on a single host.