There are several third party tools that can add enhanced capabilities for CentOS traffic monitoring. In this tutorial, we will focus on those that are packaged in the main CentOS distribution repositories and the Fedora EPEL repository.

There will always be situations where an Administrator (for one reason or another) is left with only tools in the main CentOS repositories. Most utilities discussed are designed to be used by an Administrator with the shell of physical access. When traffic monitoring with an accessible web-gui, using third party utilities such as ntop-ng or Nagios is the best choice (versus re-creating such facilities from scratch).

For further research on both configurable web-gui solutions, following are a few links to get started on research.

Nagios has been around for a long time, therefore, it is both tried and tested. At one point it was all free and open-source, but has since advanced into an Enterprise solution with paid licensing models to support the need of Enterprise sophistication. Hence, before planning any rollouts with Nagios, make sure the open-source licensed versions will meet your needs or plan on spending with an Enterprise Budget in mind.

Most open-source Nagios traffic monitoring software can be found at: https://www.nagios.org

For a summarized history of Nagious, here is the official Nagios History page: https://www.nagios.org/about/history/

Another great tool allowing bandwidth and traffic monitoring via a web-gui is called ntopng. ntopng is similar to the Unix utility ntop, and can collect data for an entire LAN or WAN. Providing a web-gui for administration, configuration, and charting makes it easy to use for the entire IT Departments.

Like Nagious, ntopng has both open-source and paid enterprise versions available. For more information about ntopng, please visit the website: http://www.ntop.org/

To access some of the needed tools for traffic monitoring, we will need to configure our CentOS system to use the EPEL Repository.

The EPEL Repository is not officially maintained or supported by CentOS. However, it is maintained by a group of Fedora Core volunteers to address the packages commonly used by Enterprise Linux professionals not included in either CentOS, Fedora Core, or Red Hat Linux Enterprise.

Remember, the EPEL Repository is not official for CentOS and may break compatibility and functionality on production servers with common dependencies. With that in mind, it is advised to always test on a non-production server running the same services as production before deploying on a system critical box.

Really, the biggest advantage of using the EHEL Repository over any other third party repository with CentOS is that we can be sure the binaries are not tainted. It is considered a best practice to not use the repositories from an untrusted source.

With all that said, the official EPEL Repository is so common with CentOS that it can be easily installed via YUM.

After installing the EPEL Repository, we will want to update it.

At this point, our EPEL repository should be configured and ready to use. Let's start by installing nload for interface bandwidth monitoring.

The tools we will focus on in this tutorial are −

These are all standard for monitoring traffic in Linux Enterprises. The usage of each range from simple to advanced, so we will only briefly discuss tools such as Wireshark and TCP Dump.

With our EPEL Repositories installed and configured in CentOS, we now should be able to install and use nload. This utility is designed to chart bandwidth per interface in real-time.

Like most other basic installs nload is installed via the YUM package manager.

Now we have nload installed, and using it is pretty straight forward.

nload will monitor the specified interface. In this case, enp0s5 an Ethernet interface, in real-time from the terminal for network traffic loads and total bandwidth usage. 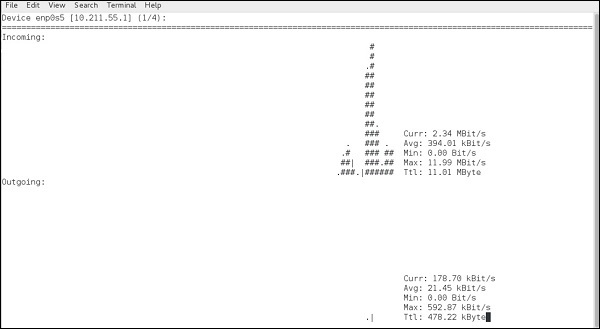 As seen, nload will chart both incoming and outgoing data from the specified interface, along with providing a physical representation of the data flow with hash marks "#".

The depicted screenshot is of a simple webpage being loaded with some background daemon traffic.

The standard syntax for nload is −

If no interface is specified, nload will automatically grab the first Ethernet interface. Let's try measuring the total data in/out in Megabytes and current data-transfer speeds in Megabits. 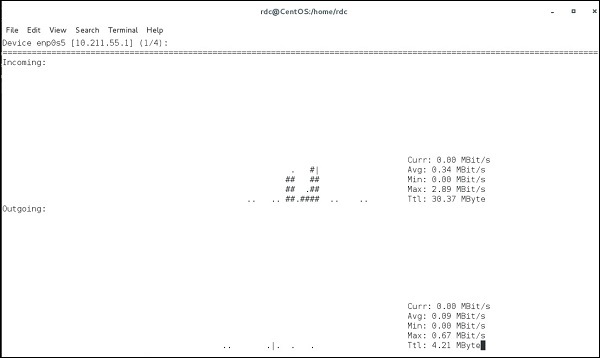 Data coming in/out the current interface is measured in megabits per second and each "Ttl" row, representing total data in/out is displayed in Megabytes.

nload is useful for an administrator to see how much data has passed through an interface and how much data is currently coming in/out a specified interface.

To see other interfaces without closing nload, simply use the left/right arrow keys. This will cycle through all available interfaces on the system.