In this tutorial we’ll be going through the steps of setting up an Apache server.

Got everything ready? Let’s move on to the next step!

To install Apache, install the latest meta-package apache2 by running:

After letting the command run, all required packages are installed and we can test it out by typing in our IP address for the web server. 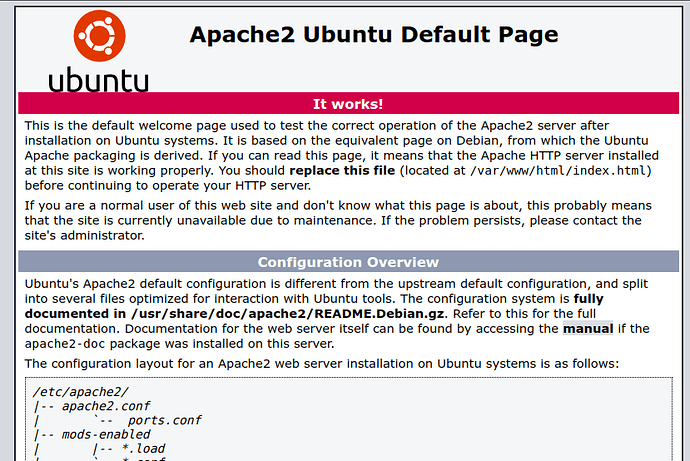 If you see the page above, it means that Apache has been successfully installed on your server! Let’s move on.

By default, Apache comes with a basic site (the one that we saw in the previous step) enabled. We can modify its content in /var/www/html or settings by editing its Virtual Host file found in /etc/apache2/sites-enabled/000-default.conf.

We can modify how Apache handles incoming requests and have multiple sites running on the same server by editing its Virtual Hosts file.

Today, we’re going to leave the default Apache virtual host configuration pointing to www.example.com and set up our own at gci.example.com.

We have it named gci here but any name will work, as long as we point to it in the virtual hosts configuration file later.

Now that we have a directory created for our site, lets have an HTML file in it. Let’s go into our newly created directory and create one by typing:

Paste the following code in the index.html file:

Now let’s create a VirtualHost file so it’ll show up when we type in gci.example.com.

4. Setting up the VirtualHost Configuration File

We start this step by going into the configuration files directory:

Since Apache came with a default VirtualHost file, let’s use that as a base. (gci.conf is used here to match our subdomain name):

We should have our email in ServerAdmin so users can reach you in case Apache experiences any error:

We also want the DocumentRoot directive to point to the directory our site files are hosted on:

The default file doesn’t come with a ServerName directive so we’ll have to add and define it by adding this line below the last directive:

This ensures people reach the right site instead of the default one when they type in gci.example.com.

Now that we’re done configuring our site, let’s save and activate it in the next step!

You should see the following output

To load the new site, we restart Apache by typing:

Now is the moment of truth, let’s type our host name in a browser.

1. Overview SSH, the secure shell, is often used to access remote Linux systems. Because we...