A Samba file server enables file sharing across different operating systems over a network. It lets you access your desktop files from a laptop and share files with Windows and macOS users.

This guide covers the installation and configuration of Samba on Ubuntu.

If you have everything ready, let’s dive straight into the installation process on the next step!

To install Samba, we run:

We can check if the installation was successful by running:

The following should be its output:

Now that Samba is installed, we need to create a directory for it to share:

The command above creates a new folder sambashare in our home directory which we will share later.

The configuration file for Samba is located at /etc/samba/smb.conf. To add the new directory as a share, we edit the file by running:

At the bottom of the file, add the following lines:

Then press Ctrl-O to save and Ctrl-X to exit from the nano text editor.

Now that we have our new share configured, save it and restart Samba for it to take effect:

Note
Username used must belong to a system account, else it won’t save.

On Ubuntu: Open up the default file manager and click Connect to Server then enter:

On macOS: In the Finder menu, click Go > Connect to Server then enter:

On Windows, open up File Manager and edit the file path to:

Note: ip-address is the Samba server IP address and sambashare is the name of the share.

You’ll be prompted for your credentials. Enter them to connect! 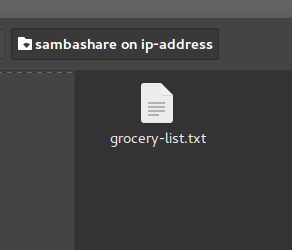 1. Overview SSH, the secure shell, is often used to access remote Linux systems. Because we...

1. Overview Ubuntu Server is Ubuntu tailored for networks and services, and it’s just as...